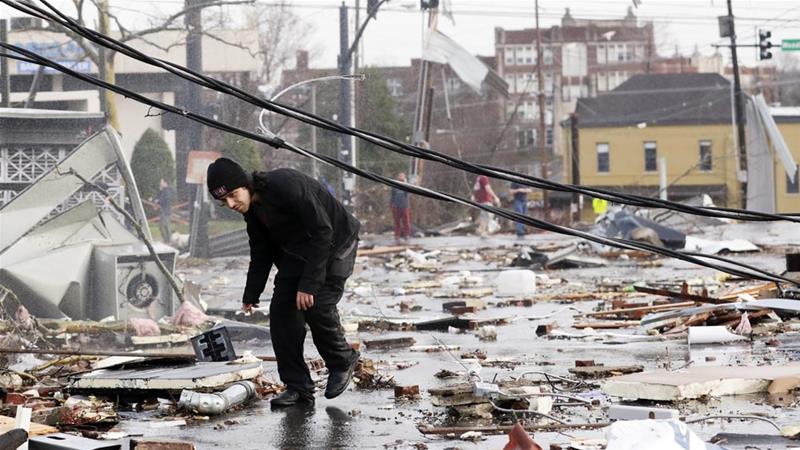 Picture of damage in Tennessee after Tornado

A severe tornado tore through central Tennessee, killing 24 people while wrecking hundreds of buildings. More than 150 people were hurt and dozens of homes and businesses were flattened when the tornadoes hit hours before dawn on Tuesday, March 3.

Other fatalities were also reported in Wilson, Davidson, and Benton counties. A state of emergency was declared in the state of Tennessee as a result of all the damage from the tornado.

According to CNN, “Initial surveys indicated EF-3 tornado damage in East Nashville, Nashville’s Donelson neighborhood and in Mt. Juliet, a town about 20 miles east of Nashville.”

In Nashville’s Germantown alone, parts of apartments and multi-story buildings were torn open.

“It just shook the house — they said it moved off the foundation,” said Jean Gregory, 73, looking at the wreckage of her home (NY Times).

According to the New York Times, “Around them, it was much worse. At least 19 people died on Tuesday morning in Putnam County after a series of tornadoes cut a swath across the central part of Tennessee, killing at least 25 people in all. In Mrs. Gregory’s neighborhood, a mix of trailers, houses and modest apartments, the devastation was everywhere.”

More than 35,000 people in Nashville remained without power as of Tuesday evening. The utility said power poles were damaged during the storms and the workers were having trouble getting to the impacted areas.