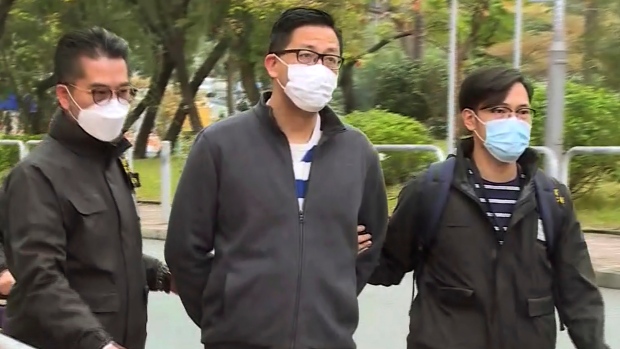 A photo taken from a video posted to Facebook which shows former lawmaker Lam Cheuk-Ting getting arrested. Photo credit : TVB via AP(associated press)

On Wednesday, January 6, fifty-three pro-democratic figures were arrested by Hong Kong police. Six people have been arrested for organizing unofficial primaries, and the rest for participating in the event—CNN. “At least seven members of the Hong Kong’s Democratic Party—the city’s largest opposition party—were arrested, including former party chairman Wu Chi-wai.” According to U.S. News, they were arrested under the national security law that was enacted last year on June 30.

June 30 is one day before the anniversary of the handover of Hong Kong in 1997. The handover was when the British gave Hong Kong back to China after a century and a half of rule. Media company History writes “The handover was meant to establish a ‘one country, two systems’ relationship between China and Hong Kong that would last until 2047, with Hong Kong existing as a special administrative region.” Many Hong Kong residents have thought that Beijing has not been following the “one country, two systems” framework over the years. This national security law could be seen as one of those times. Although, this law is not only applicable to Hong Kong’s permanent residents.

John Clancy was one of the many people arrested. According to BBC, “Mr. Clancy, (John Clancy) a veteran legal activist and long-time resident of Hong Kong, is chairman of the Asian Human Rights Commission and the first US citizen held under the new law.” John Clancy was one of the many people arrested. One provision under the national security law is that you can’t stand for public office if you are found guilty. Another is that you can be wire-tapped and put under surveillance if you are suspected of breaking the law. A third is that it can be considered terrorism if you damage public transport facilities. An article by the BBC that was published last June states, “The details of the law’s 66 articles were kept secret until after it was passed. It criminalizes any acts of: secession….subversion….terrorism….collusion with foreign or external forces.” The mass arrests on Wednesday are the biggest use of the law since it came into effect. Reuters reported on August 29, 2020 “A growing majority of people in Hong Kong support the pro-democracy movement’s goals after China introduced a national security law for the city, but backing for the protest movement was a smaller 44%, a survey conducted for Reuters showed.”