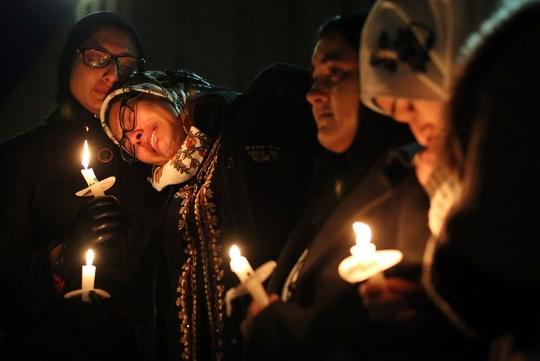 As movies like American Sniper spread violent messages and news of ISIS storming through the Middle East causes a rise in anti-Islamic feelings, American Muslims across the country have been victims of vicious threats and hate crimes.

Recently in Chapel Hill, North Carolina, three young Muslims were victims of a heinous attack on their religion. Craig Hicks murdered his neighbors Deah Barakat, Yusor Abu-Salha, and Razan Abu-Salha. He shot them all execution style.

He has since been indicted for three counts of first degree murder.

Police believe these murders were over a parking dispute. Neighbors often dealt with Hick’s temper tantrums over things as miniscule as parking. Although Hicks expressed unwarranted anger towards many people, the attack was clearly a hate crime. The three victims had expressed fear of their neighbor to friends many times. Hicks has voiced anti-Islamic and anti-religious feelings before in Facebook posts.

One of his posts described religion as “the world’s most successful pyramid scam.” Another reads “If you plan to be enjoying Heaven while multitudes are tortured… then you are as much as a sociopath as the God that you worship.”

Hicks was clearly prejudiced against religious people, especially Muslims. He intimidated his neighbors, and then one night, he murdered them without cause. If his numerous posts, some of which are too graphic or violent to share, do not convince you that this was hate crime, consider the fact that this was an execution. Hicks wanted to send a message.

To call this tragedy anything but a hate crime-to blame all of this on a parking dispute- is to disgrace the memory of Deah Barak, Yusor Abu-Salha, and Razan Abu-Salha.

If you are skeptical of the hardships faced by American Muslims, I encourage you to try to imagine what it would be like to be Islamic in this country right after 9/11. Imagine the side glances and glares you would get. Imagine neighbors an old friends being too afraid to speak to you. Imagine losing your job for inexplicable reasons. Understand that those Anti-Islamic feelings still exist today, in a country full of people who tend to blame terrorism and the horrors of 9/11 on an entire religion rather than on the group responsible. (To those who believe all Muslims are terrorists for the acts of Al Queda, the Taliban, or ISIS, please understand that that is the same as believing all Christians are terrorists for the acts of the KKK.) As Americans, we should always be against terrorism, but we should never send any Anti-Islamic messages- the two do not correlate.

It is our duty as citizens of this “all men are created equal” shouting country to see beyond fear. There is no reason to fear any religion or its followers.

A lot of fear stems from the unknown, or the inability to understand. Because many Muslim beliefs are different from those of mainstream America, it is easy to develop a prejudice against our Islamic neighbors. We must learn to embrace and accept the beauty of our differences here in the Melting Pot.

News of terrorist attacks aids in the growth of Anti-Islamic feelings. We must remember that terrorism has no face, color, name, or religion.

Pop culture sensations like American Sniper can almost act as war propaganda with the violent depiction and celebrated murder of Muslim people. We must remember that in the war on terrorism, terrorism was the enemy, not Islam.

Many factors of American society allow Anti-Islamic beliefs to permeate our values, often this happens subconsciously and we go without noticing it. We must work to ensure that our own senseless fear will not destroy the lives of more innocent Muslims.

RIP to Deah Barak, Yusor Abu-Salha, Razan Abu-Salha and countless other Muslims who have lost their lives due to hate, fear, and misunderstanding.