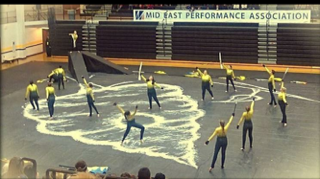 Winter Guard has been in their competitive season since February with performances at Wright State University, Bellbrook, and Centerville.

“I thought that our show [at Wright State] went extremely well. We had little mistakes that normally don’t happen but it isn’t something that we can’t fix,” said sophomore Kaitlyn Cross.

The Winter Guard’s show, “The Hive,” is based off of the music “Flight of the Bumble Bee” written by Nikolai Rimsky-Korsakov.

“This year’s show is nothing like we have ever done before. It is very fast, we never stop and it takes a lot out of us both physically and mentally,” said senior Haley George.

The guard practices on Mondays, Wednesdays, and Saturdays.

The practice, however, is paying off.

“I’m content with our score, but our coaches want first, so they are changing our choreography to harder, faster work to compete with the team who beat us,” said junior Sharlee Twarek.

The team has placed first at every competition, except at Bellbrook where they placed second on February 21.

“We have been working really hard, harder than other seasons, because we have a chance of making it to finals this year. By perfecting our facials, tosses, and dancing, I know we can do it,” said junior Michael Philpot.

Guard competitions continue into the first week of April.